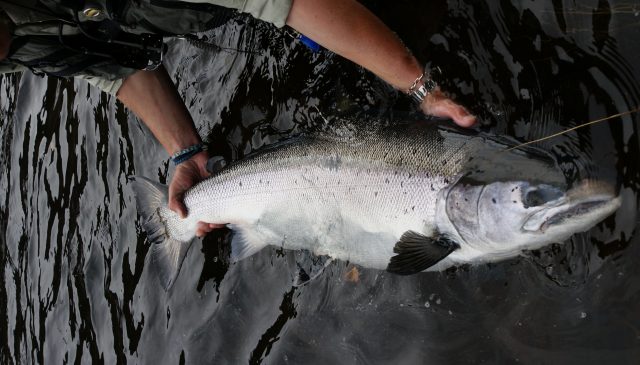 Hallowed Waters Journal is a big proponent of Atlantic salmon fly fishing. There is nothing more pure and sensational than to watch an Atlantic salmon take a dry fly or chase a swinging fly on the spey. We are in constant search of information as to why all the populations/runs on the planet are in great peril if corrective conservation measures arent taken. This new very important study released June 2021 in the Nature Journal Scientific Reports by a group of North Atlantic scientists using radio telemetry migration route studies show very unique individualistic population migration dynamics, which once thought were very simple and broad with regards to Greenland and Faroe island feeding grounds.

The new study reveals that southern populations like Ireland and U.K, France and northern Spain have to travel greater and sometimes complex distances, through increasingly warmer waters and potentially more ravenous predators invading new hunting territories to feeding grounds than in the past. Thus maybe the reason why northern Norwegian and Icelandic populations perhaps are the most stable. Climate Change is once again an obvious smoking gun culprit since it is warming central Atlantic waters frontal divides with North Atlantic/Arctic much higher latitudinal than in the past. This same scenario “may” be theoretically happening to North America like Maine and southern Canadian Provinces, whereas northern populations like Gaspe Quebec/Labrador have more stable consistent runs.( Note: Author’s theory- the big riddle here is Newfoundland’s low returns, despite prime feeding ground access)

As far as the success of Gaspe, Quebec’s Atlantic salmon rivers to withstand much of the decline generally seen throughout the globe except for Russia and Iceland, and that many North American fly anglers have experienced is a combination of factors perfectly suited for Salmo salar. The fact and in my opinion the rivers maintain a high degree of consistent runs is due to that they are highly regulated on a local level as the Irish Times piece states the need for. Here in Quebec through ZEC ( zonal ecology control) management, scuba underwater “sustainability” monitoring throughout the season of spawning adults by friend and photographer Jean-Guy Beliveau and catch and release fly fishing, along with tight monitoring of native harvest is one main reason local management is the key to salmon populations globally. Also I believe the slightly fertile and warmer Bay de Chaleur provides excellent feeding grounds and kelt repair prior to returning to the big ocean predator/prey dynamics, which seems to be more significant in North Atlantic waters and changing predator dynamics, which is similarly occurring in the Great Lakes. Also their rivers are very fertile, spring-fed and prime for Salmo reproduction and nursery . This may heave a huge impact on kelt population (post spawn returners to ocean feeding and return spawners) that are already in weakened state. Also increased diversification of predators in warming North Atlantic waters make it difficult for smolts to reach the prime frontal feeding grounds where Arctic/Atlantic waters meet southern currents that are progressively getting warmer and shifting north.

Here is the detailed study from Nature Journal’s Scientific Reports for you to read if you are passionate about the science of the Salmo salar plight.

Also, here is the link to the Irish Times piece which sheds more light in a condensed fashion: https://www.irishtimes.com/sport/other-sports/new-study-reveals-migration-route-of-atlantic-salmon-in-north-atlantic-1.4602590

The bottom line of what we can take from these studies as a fly angler through the monitoring of these feeding migrations are several and very useful in fly selection. These studies support the multi-dimensional feeding/prey aspect that has supported our fly selections for centuries. The time spent in pelagic zones lend itself to the blue/green fly selections that have embodied the salar fly choosing experience. Blue, green. white, silver color motifs are always prominent due to the capelin, herring, sardines of all sorts, smelt etc. Black colors allow form and shape differential since the salmon are very surface oriented and also feed on elvers (eels) and sand eels. Also in their studies their ability to dive deep and forage are perfect cues for crustacean, jellyfish, and squid predations and fly imitation in the red/orange color spectrum are ideal especially as salmon are in the river systems longer and their visual spectrum focus turns on the red/ornage vs. the fresh run blue/greens.

Also from a conservation standpoint, the need for “micro-regional river management” is essential for marinating a strong grip on each rivers current run sustainability status. A “one size fits all” approach just does not work with the new climate change impact on some ecosystems more than others.

In our issues of Hallowed Waters Journal Hallowed Waters Home Page we take Atlantic Salmon fishing very serious. We are one of the few magazine/journals that gets deep into Atlantic Salmon spey, presentation, reading water and how the fish takes our flies. Two excellent in-depth pieces recently were featured in our Fall and Spring issues and picture below:

In the end, the more we know about the fish we love and the more we can do to protect them, we will thus hopefully have a long and healthy future ahead for the world’s Salmo salar Atlantic and Landlocked population’s and civilization’s most amazing founding fish! Subscribe to our journal for all the passion and journey for trout and salmon you will ever empierce- come to http://www,hallowedwaters.com…your journey will never be the same!