"Why?" you ask, why does this complex hatch situation keep getting more extreme and more important in each passing year? The devilish trichopteran details and the skinny are in the epic in-depth piece in our first issue of Hallowed Waters. " The Mayfly vs. Caddis Conundrum"
You are here: Home / caddis / It’s Mayfly time-but why the caddis fuss? 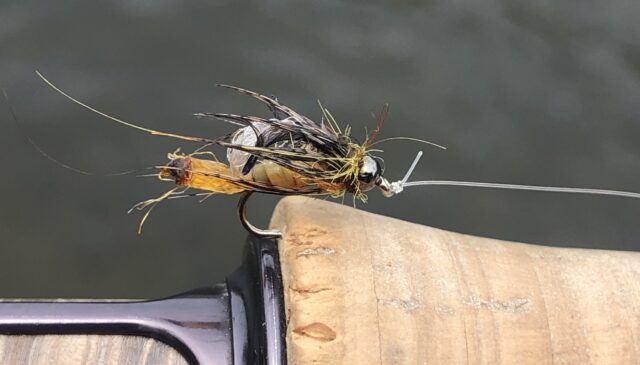 It’s mayfly season-right? So our hatch matching attention should be on those amazing, beautiful, and delicate mayflies we have waited all year for. But???…why are those bloody sedges, as the Brit’s call them, making such a fuss? The caddis conundrum is a dilemma that has plagued hatch matchers for centuries.

Crazy stuff is going on now right now in the merry month of May. In the upper Midwest, Canada and northern New England, along with Montana, a severe drought like never seen is occurring. It is happening in a month where rain and showers plus snow melt ( which we had next to none of last winter) are the norm. Last year in Michigan we had epic flooding and the most amazingly thick mayfly hatches- especially the the drakes, like I have never witnessed. Gray Drake Siphlonurus hatches were at blizzard proportions around the clock.

So when we should be tying and focusing on the gentle Ephemerella and drakes we love, there is one little critter that isn’t bothered at all by the climate change whacky weather extremes we are experiencing. It’s a hearty little critter that emerges regularly, eats the crap out of plankton and detritus which are increasing due to climate change and more sunny weather/ droughts of high pressure systems stuck over us. They can tolerate floods, pollution and warmer weather due to their hardened cases they build like buggy armadillos. The amazing Tricoptera caddis is climate change’s poster child , and the trout love them!

The caddis renaissance was started in its intricate form by the late-great Gary Lafontaine in his monumental classic work ” Caddisflies” He already had a vision of the future when he says: ” As pollution, climate changes, stream degradation and siltation become greater menaces’ to trout rivers and streams, Trichopteran populations will thrive regardless of habitat destruction as mayfly populations are eliminated or become less significant to trout diets” Thus the thick bodied caddis pupae and larvae are ideal morsels of Gastronomique delight to trout, especially in plankton rich tailwaters. Gary also goes on to describe the key” trigger stimuli” trout have to certain food types.

” Every prey organism possessed one characteristic that tipped off vulnerability or availability, one characteristic that was visible at a greater distance than any of the other traits. When fish fed heavily on a single organism, locking into a stimulus-response pattern, they moved to intercept the prey when they recognized this identifying feature” ( Caddisflies-Gary Lafontaine)

As LaFontaine through his underwater scuba work saw a distinctive sheath/gas bubble emanating from emerging caddis and how significant he thought it was, Dr. Carl Richards saw things otherwise. I recall many nights, after a few Knob Creek bourbons in a Solo Cup in the deep woods tailgate think tanks by the Muskegon river, Carl would say: ” there are no god damn gas bubbles…that’s all crap invented to sell god damn books!” Though Carl did admit in his basement aquarium tanks that he witnessed microscopic bubbles being infused by larvae transforming into ascending pupae which a trout could key in on, they were defiantly not of the same magnitude or importance as LaFontaine described them in his scuba exploits. At a fly fishing show sponsored by Fly Rod Reel decades ago I was headlined humbly alongside the great LaFontaine. I had the chance to speak with Gary about this holy “gas bubble” schism that rivaled Martin Luther and the Catholic church. He was the nicest, kindest guy I’ve ever met and had such raw energy and enthusiasm for his subject. He could only laugh when I told him what Carl said to me in fishing buddy/bourbon fueled late night passionate chat.

Though the Mother’s Day caddis ( Grannoms) are a massive hatch on the limestoners in Pennsylvania and the Driftless area, the cinnamons are spread-out in significance on the freestone streams. But one thing I know for sure is when we are looking for drake or Sulphur eating trout, those damn caddis are always in the mix and despite having our perfectly tied mayfly adults , emergers or spinners tied and greased up, its those bloody sedges/caddis the fish are takli8ng. And yet we ignorantly cast our mayfly patterns and eventually switch to a caddis pattern and start catching trout in the middle of a mayfly hatch-funny how that works. An emerging caddis pattern will catch the most selective big trout smack dab in the middle of a mayfly hatch. John Miller, guide/bug guru and big brown Buddha of the magnificent wild trout water of the Delaware told me last year: ” The caddis saved our guide’s ass last year when mayfly numbers were down. The wild fish were so glued into them and had me switching back to caddis imitations constantly, no matter how much I tried to fish a mayfly pattern”.

“Why?” you ask, why does this complex hatch situation keep getting more extreme and more important in each passing year? The devilish trichopteran masking details and the skinny are in the epic in-depth piece in our first issue of Hallowed Waters. ” The Mayfly vs. Caddis Conundrum”

If you are looking for those answers, to those hair-pulling episodes when you thought you had it figured out but didnt, and needed to know more, this and other pieces like it in Hallowed Waters Journal will make you re-think your relationship with your flyrod. your reel and those fly boxes like never before. Sometimes no matter how long we have fly-fished, or just starting out, the beauty of our game is that so much is involved in this wonderful world of trout and the fly that baffles and humbles us daily

In this hallowed mayfly and caddis season, you owe it to yourselves to get involved in the pages that fuel our onstream desires. We might not always be on the water with life’s commitments, but with Hallowed Waters Journal we will take you there and make you a better thinking fly fisher…come to www.hallowedwaters.com journal today- subscribe and see what all the talk , rave reviews and excitement are all about…the passion and journey awaits you!

matching the hatch for mayflies is often a caddis conundrum-learn these mazing details!