You are here: Home / caddis / Autumn Caddis & The Trout and Steelhead of October 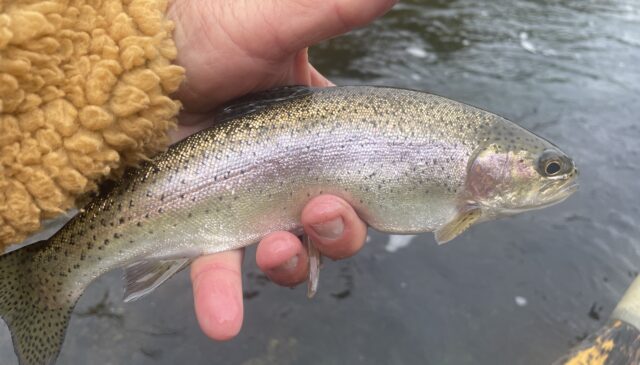 ( A gorgeous October Michigan rainbow- resident Eagle Lake California strain that Michigan has adopted- or Michigan strain steelhead that hasn’t smolted due to its stubbornness- you be the judge. Regardless, this 15 inch fish jumped chrome silver and put up a blistering fight on a 12 foot 3 weight trout spey rod)

The New York Yankees used to be called the “Boys of October”. Since they always showed up for the playoffs and the World Series in the decades past. As nuances go in the hatch-matching world of the troutbum, months and seasons are characterized by the hatches and trout feeding opportunities that define them. As April and and May belong to the Hendrickson’s and Early Black Stoneflies, October belongs to the always confusing and tricky Trichopteran flies of autumn. But above all, the boys and girls of the trout world of October are simply some of the most beautiful and sporting that swim- Oncorhynchus mykiss: aka Rainbow trout and Steelhead. This year I have been spending more of my guide time and personal time fishing in shallow waters near dams and warmer sections of the rivers. I have learned and observed a ton about rainbow behavior-including steelhead.

As Michigan rivers teem with migratory spawning Coho and King salmon, the true gold lies in the resident rainbow, steelhead and steelhead smolt holdovers that often forgoes the 10 inch silvery smolt stage like this beauty. Getting overwhelmed in the massive food supply of the rivers, they hang out in the river until next smolting; or perhaps meander down to the big lake on their time; or simply become resident rainbows due to the large amount of Michigan’s and the Great Lakes river’s ultra rich food sources in the alkaline spring fed rivers. These bows pound the autumn caddis with a serious vengeance-then leap like chrome steelhead. On a 3-5 weight rod and in dry fly fishing mode, there is nothing more spectacular in the fly fishing world!

Autumn caddis come in several types and packages. The Giant October Sedge (Limnephilidae) are the October giants that get every trout and steelhead’s attention. Though they are not swarming caddis like Hydropsyche, there are often enough of them to send a strong take and signal to the fish

But the real trout feeding frenzy occurs when the Hydropsyche caddis are on the water. Starting in summer and lasting until November, these tri-brood spectacular cinnamon and green caddis hatches bring every rainbow up in the river. As brown trout and brook trout are preparing; or in the act of spawning, they are best left alone and the rainbows truly love it, since they have all the food to themselves and are the alpha feeders.

In autumn, Hydro’s emerge from noon until dusk. Ova-positing females descend on the water as soon as the first warmth of the day occurs, as tons of bio-drifting caddis pupae float in the film and meniscus. Caddis move around a great deal: fidgeting, squirming and are are very fast emergers. Thus skittering caddis, waking them and using the author’s ” Statue of Liberty ” technique which I have developed and have taught clients is super -deadly to rising rainbow and brown caddis feeders.

Fishing the caddis hatches entails what form of the hatch the trout are keying in on. Since pupal emergence and egg-laying will be occurring at the same time, there are four main stages you must concentrate on. When nothing is happening, try swinging soft hackle tungsten head pupae as shown in the author’s tie

As the pupae emerge and get stuck in the film transforming to adults, the tear-drop emerger and Caddis Adult-tear drop shuck still in place is still the ticket.

One phase that is very much under-looked is the egg-diving phase. Here Females will dive down to the rocks and substrata to lay their eggs. This is where the tear drop shape on ova-positing females is vital to imitate the air bubbles trapped by diving females. It is “not” in the emergence that Lafontaine misrepresented by his comments about gas bubbles , which are nowhere to be found in emergers. It is in the diving females that carry air bubbles down with them and back-up to the surface that the Antron bubble imitates as does the tear-drop. Another highly overlooked phase is the quad-winged ( shaped like a butterfly spent wing) spent spinner phase at dusk- trout load-up heavily on them.

STEELHEAD ON THE WAKING CADDIS

October’s warmer water temperatures in the Great Lakes tributaries coupled with lower water flows have steelhead in shallow tail-out riffles and slower flowing pools Here they are still fresh off the big lake bite and still very aggressive If there are not too many spawning king and Coho salmon around for them to get glued in on the ass-candy/egg binging caviar, they will look up like rainbows do. The key is to find warmer rivers that have 50-60F rivers like many tailwaters like the Muskegon and Manistee have in Michigan. Several Lake Erie, Lake Huron and Lake Superior river tributaries have these ideal conditions for the yet to spawn steelhead rainbows that are caddis oriented when good caddis hatches and high plankton loads like on tailwaters and warmer rivers exist. The dries should be the deer-hair Howell/Oregon “Spuddler” varieties tied with foam waker backs. Or swing pumpkin colored spey flies that will do the trick in higher water levels. The key with swinging dries for Great Lakes steelhead is to first locate shallow holding lies and fulcrum take points. Second vary your presentations from “wake and dead-drift” to pure dead drifting and short stutter wakes. If caddis hatches are present match the hatch with the patterns shown in the article. Patience, reading water and an open mind are required for this game. If you want numbers put on an intruder or glo-bug!

Author’s Note: Hallowed Waters Podcasts are reaching tens of thousands of listeners with its highly cerebral and technical content along with engaging discussions and guests. This fall and winter we will be embarking on a series of steelhead conversations with the authorities and experts in the chrome craft- Join us! Hallowed Waters Journal is also going to print- its taking time, but we feel it will be well worth it!

The strain of steelhead sure makes a difference in the dry fly orientation. Summer run fish are much more aggressive to the dry vs. winter strain But given the right swallow conditions and warmer 50F water they still will take the dry. Skipper or grilse younger year class are much ore experimental in their dry fly orientation. Lake Erie rainbow steelhead that run smaller on average are great dry fly takers if given the opportunity. Smaller Coho salmon as seen below are also secondary feeders and are accustomed to taking insects in the big lakes. Thus they will take a caddis or stimulator in their very early-run stages-again given the right conditions low water conditions of fall.